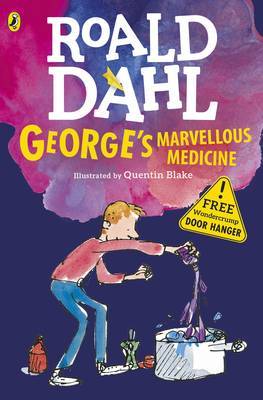 George Kranky's Grandma is a miserable grouch. George really hates that horrid old witchy woman. One Saturday morning, George is in charge of giving Grandma her medicine. So-ho! Ah-ha! Ho-hum! George knows exactly what to do. A magic medicine* it will be. One that will either cure her completely ...or blow off the top of her head. *WARNING: Do not try to make George's Marvellous Medicine yourselves at home. It could be dangerous.

Sitting in a hut at the bottom of his garden, surrounded by odd bits and pieces such as a suitcase (used as a footrest), his own hipbone (which he'd had replaced) and a heavy ball of metal foil (made from years' worth of chocolate wrappers), Roald Dahl wrote some of the world's best-loved stories including Charlie and the Chocolate Factory, The Twits, The Witches, The BFG, Fantastic Mr Fox, James and the Giant Peach and lots more. Quentin Blake is one of Britain's most successful illustrators. He has illustrated nearly three hundred books and he was Roald Dahl's favourite illustrator. He has won many awards including the Whitbread Award and the Kate Greenaway Medal and taught for over twenty years at the Royal College of Art. In 1999 he became the first ever Children's Laureate and in 2013 he was knighted in the New Year's Honours.