Day in the Life of the Brain 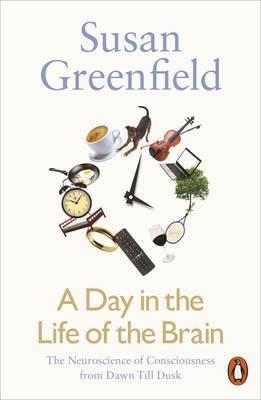 Day in the Life of the Brain

A Sunday Times and Financial Times Book of the Year What happens in our brains when we wake up, savour a meal or a glass of wine, walk the dog, stare at a screen, daydream or sleep? World-renowned neuroscientist Susan Greenfield draws on her own pioneering research to illuminate the mystery of consciousness, and how our brains make us who we are. 'Offers tantalising clues to the universe inside our heads' Rob Kingston, Sunday Times, Science Books of the Year 'One of the few brain researchers making a serious effort to investigate the rich continuum of conscious thoughts and feelings that underlie every moment of our waking lives' Clive Cookson, Financial Times 'An illuminating, engrossing journey' Nature 'Her writing is clear, sharp, devoid of difficult jargon and chatty. The brain's complexity comes across vividly' Anil Ananthaswamy, New Scientist

[Greenfield is] often described as the foremost female scientist in Britain, but is one of the best of any gender, anywhere, at getting complicated ideas across Independent on Sunday

Baroness Susan Greenfield CBE is a Senior Research Fellow at Lincoln College, Oxford University. A scientist, writer, broadcaster and Cross-Bench member in the House of Lords, she has been the recipient of 32 honorary degrees from both British and foreign universities, and of many awards including Chevalier Legion d'Honneur from the French Government and an Honorary Fellowship from the Royal College of Physicians, as well as being selected as Honorary Australian of the Year in 2006.